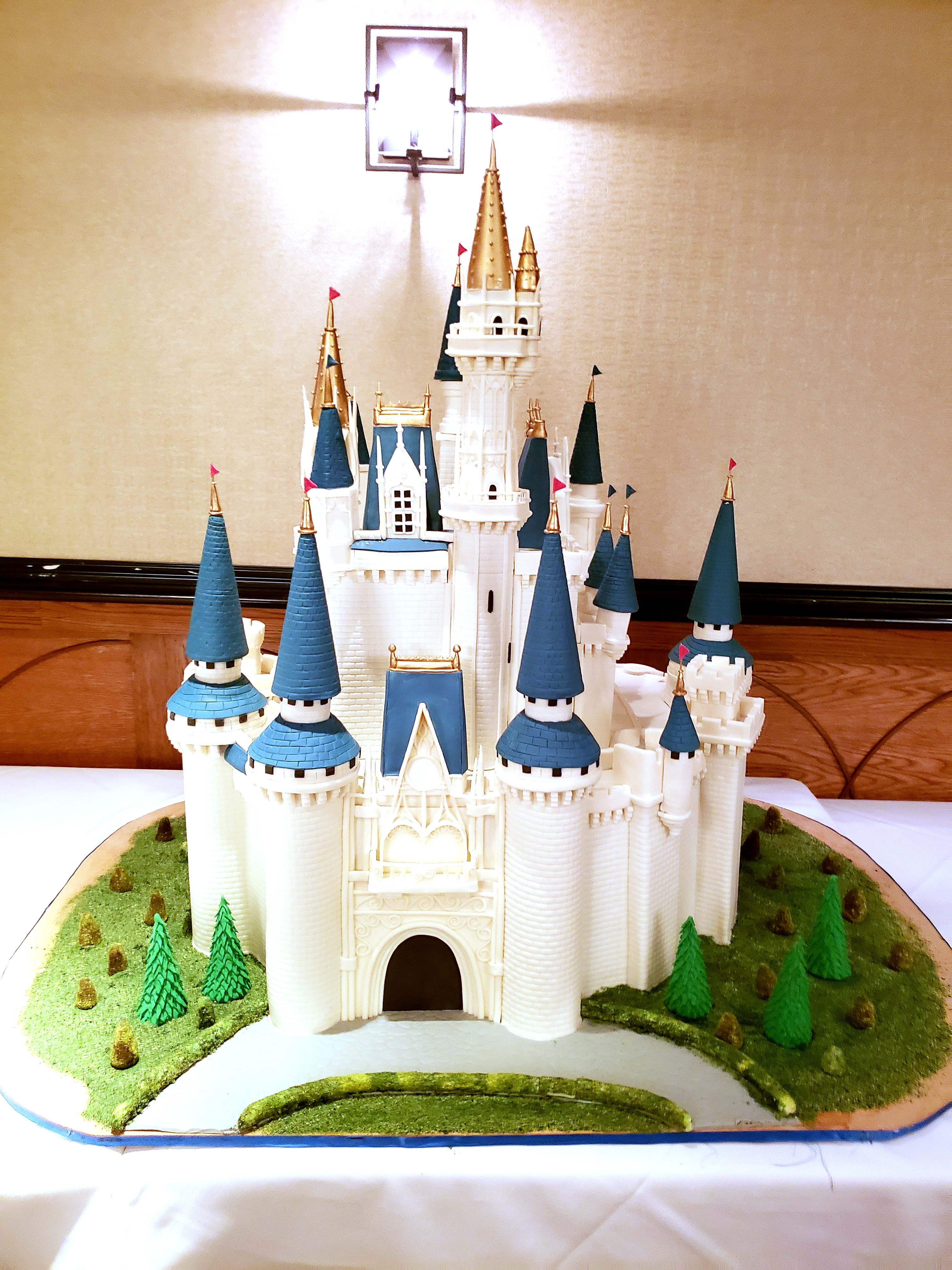 When making literally the biggest cake in our history, there were a few glitches along the way! They say to measure twice & cut once. Well, you can measure 50 times but if you don’t measure correctly, you’re still all messed up! But it wasn’t the cake that we didn’t measure correctly! Stay tuned for the drama that ensued.

When I measured the doors to our bakery & sized the cake board to where we thought it would just fit through in a tight squeeze, I measured with the door closed. I TOTALLY failed to take into account that our swinging door kind of kicks back into the door space & considerably narrows it down by a good 2 or 3 inches! Oops!!! We literally couldn’t get it out the door!

Now we know to measure with the door OPEN! Ugh, yes probably should have known that already, but hey, we are cake artists, not building contractors. Lesson learned for the future!

It was miraculous that Matt was there … with his extensive tool box. We had to take that door down, & it had weird bolts of all sizes holding it on. We have some tools, but nothing like that. Fortunately, Matt had all the sizes of wrenches needed to get the bolts out, so after a brief struggle, the door was out of the way. Once it was, the board fit through exactly like we thought it would, and we loaded it in the van with no problem.

Traffic was terrible, especially with the rain, but we finally made it to Ruth’s Chris restaurant safely. We pull up to the front and get out to scout out the situation. There are glass doors all the way across the front, so we thought we’d be in good shape, until we realized the horrible truth.

The glass doors were historical doors. They were 4 individual doors, and quite narrow, NOT big swinging double doors like we thought they were. No way it was coming in the front doors.

The event coordinator showed us where to go around to the service entrance and we scoped it out. We would have to go through the kitchen area; it was wide enough. There were two swinging doors out to the dining area, where we would have to go through to get to the private room. We were worried about those and sure enough, when we got the cake to the doors, it wouldn’t fit.

Now we were really worried. The coordinator was so nice and apologetic. I had told her how big the cake board was, but she thought the doors would be wide enough, and honestly just didn’t realize exactly how big I was talking about. We set the cake partially on a counter and tried to figure out what to do. Then one of the servers pointed at their other door and said “Look! The bottom of the door is wider than the top. Can you lower it down and come through the bottom of the door?” Sure, let’s try it. Their wonderful staff had already jumped in to help and the rest were gathering around watching, and having to wait since a giant cake was blocking their doorway!

Even at the bottom of the door, it still wouldn’t go through. At this point, we were about to despair. Suddenly, one of the servers helping us pointed at the bottom of the door hinge and showed us that it was about an inch off the ground. Our cake board was about 3/4 of an inch thick, including the feet it was sitting on. Our only hope was to slide it UNDER that hinge!

We started sliding it under, and it worked! Until, we realized the back of the castle was going to hit the door and possibly rip off some of the details. But the castle was set way back on the board to make room for the front driveway and landscaping, so it could definitely go through on the front side. We backed it up and carefully spun it around in the small vestibule. This time, it slowly slid through. Jo was pulling it from the front; our wonderful helper from Ruth’s Chris was pushing from the back; I was down in a frog-like squat helping scoot it from the side; and several servers were also helping us slide it through.

When the back of the cake cleared the door, the servers and the patrons who could see the spectacle erupted into cheers! Now we could pick it up and take it to its table! Yayyy!!!

All is well that ends well

The client was happy and the children lost their MINDS when they saw it! They were so happy and thrilled to see the huge castle cake there. The biggest challenge was keeping them from tearing it apart immediately! Haha! I’m sure they devoured it later. 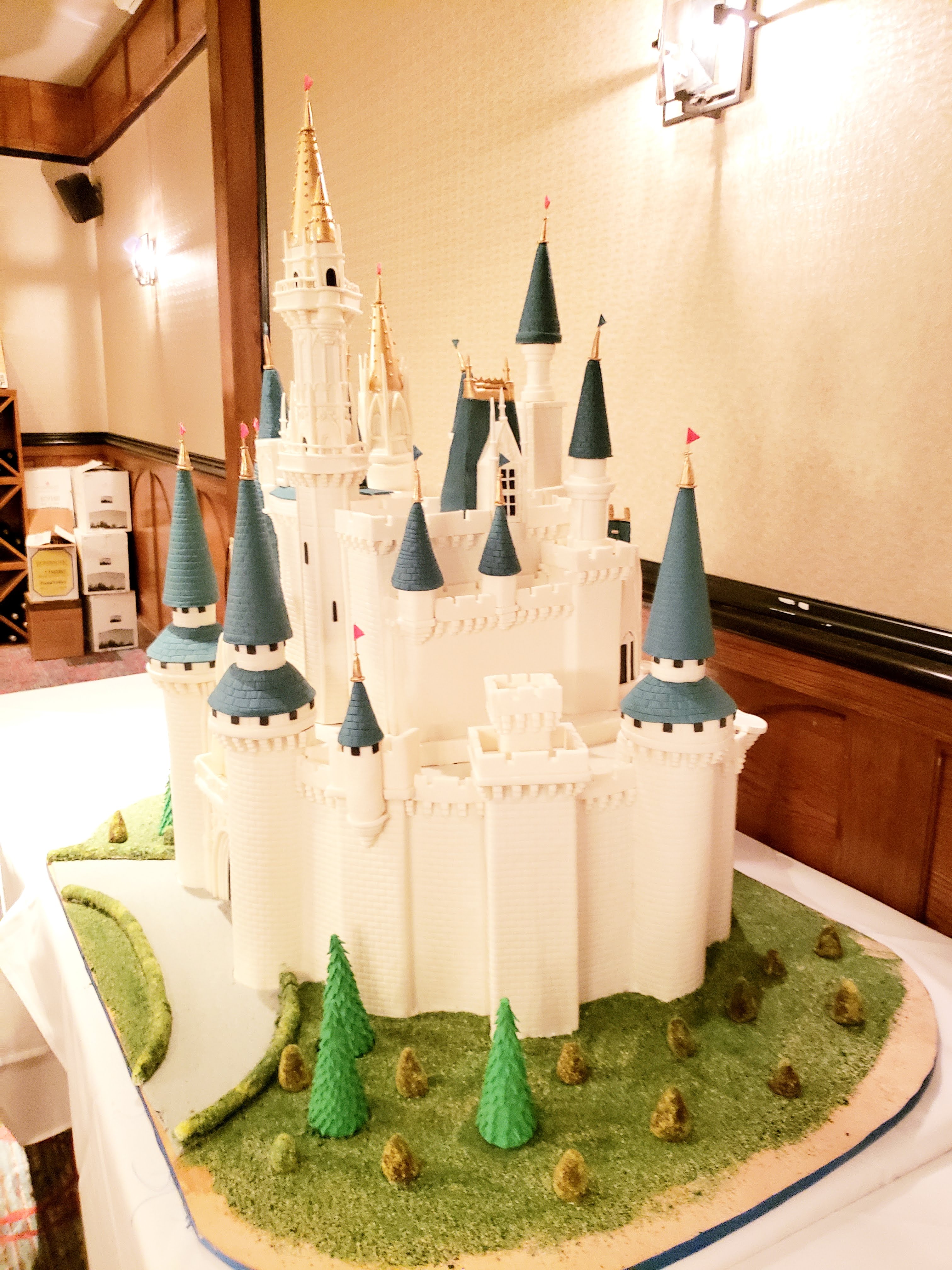 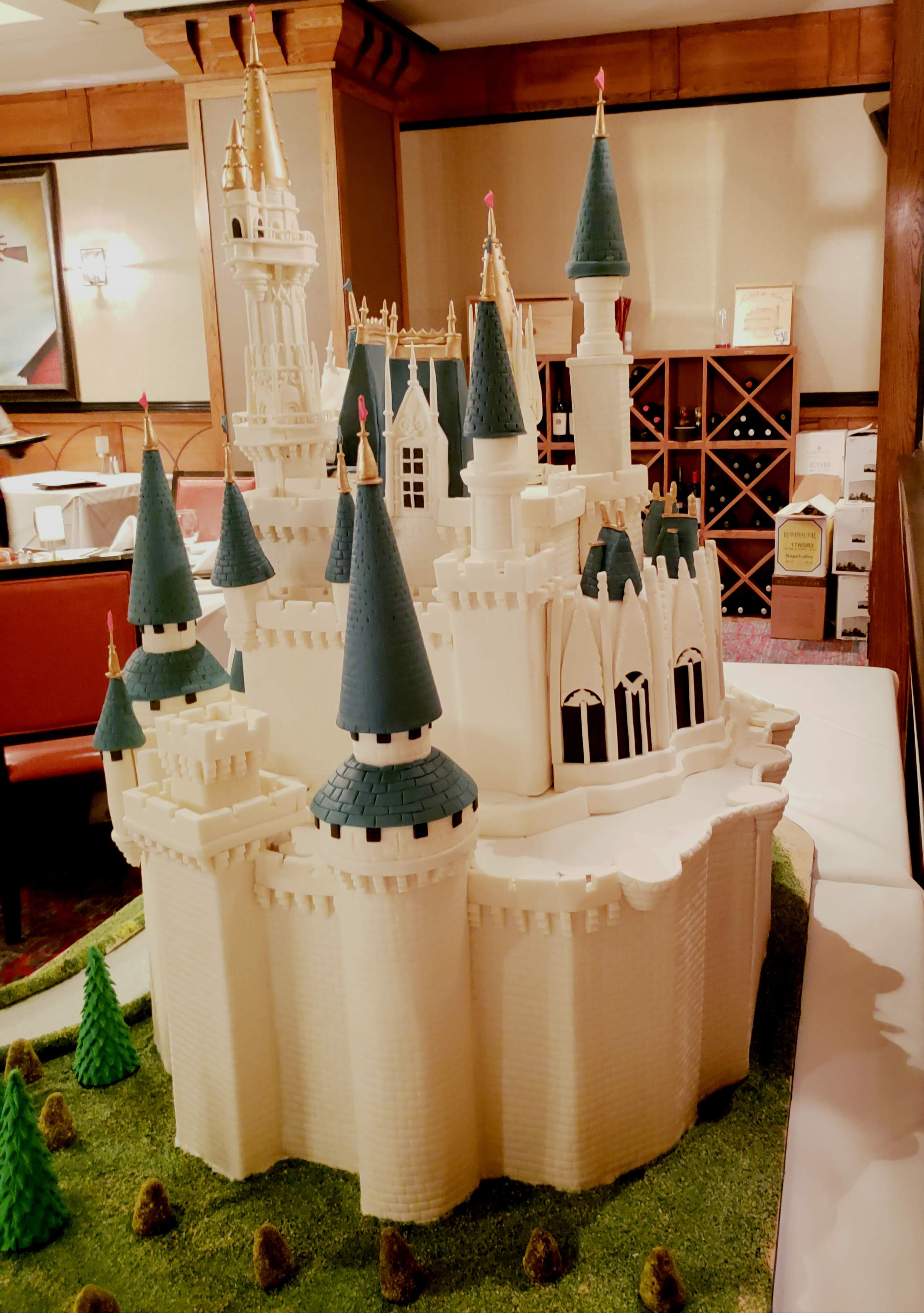 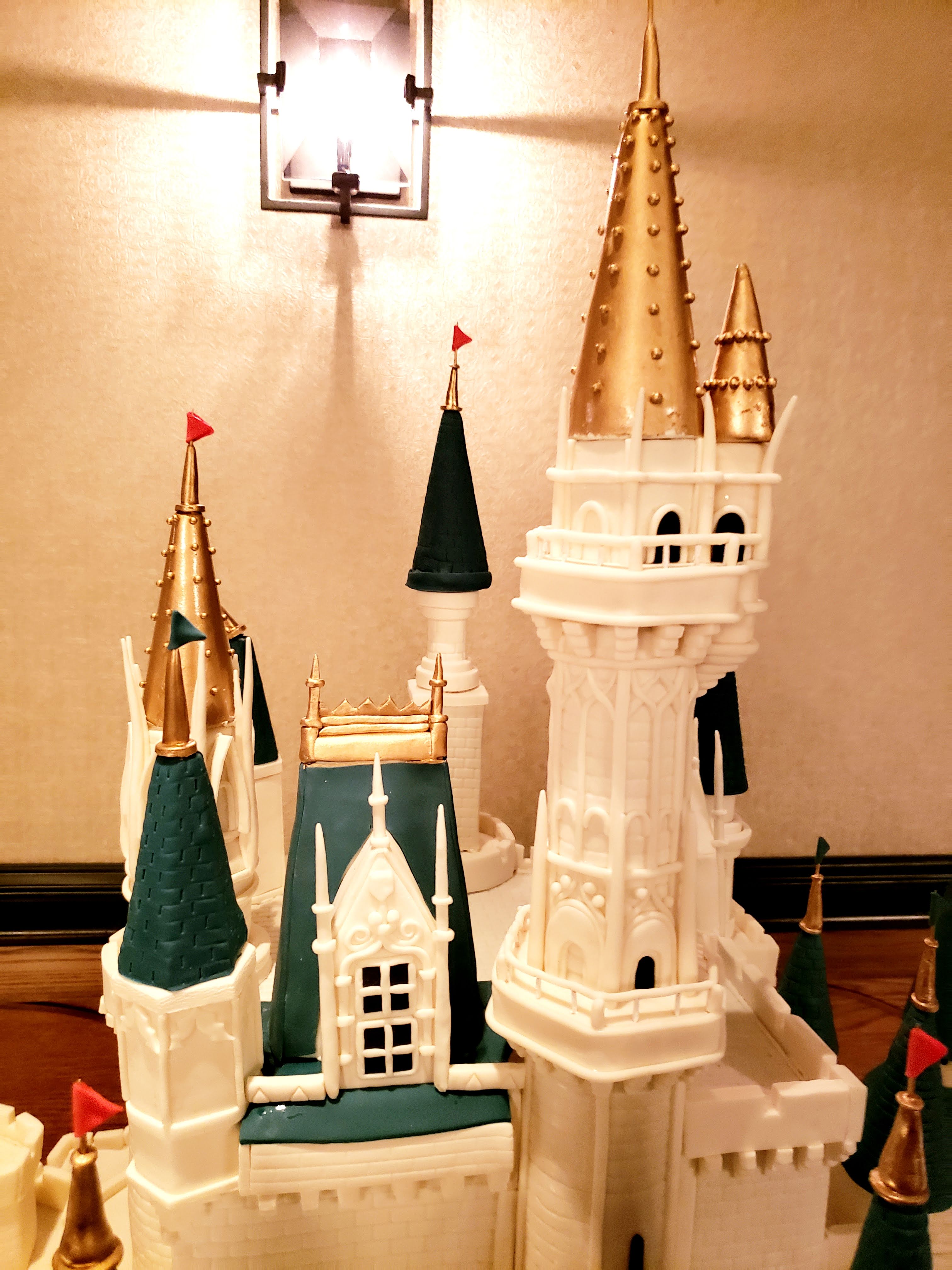 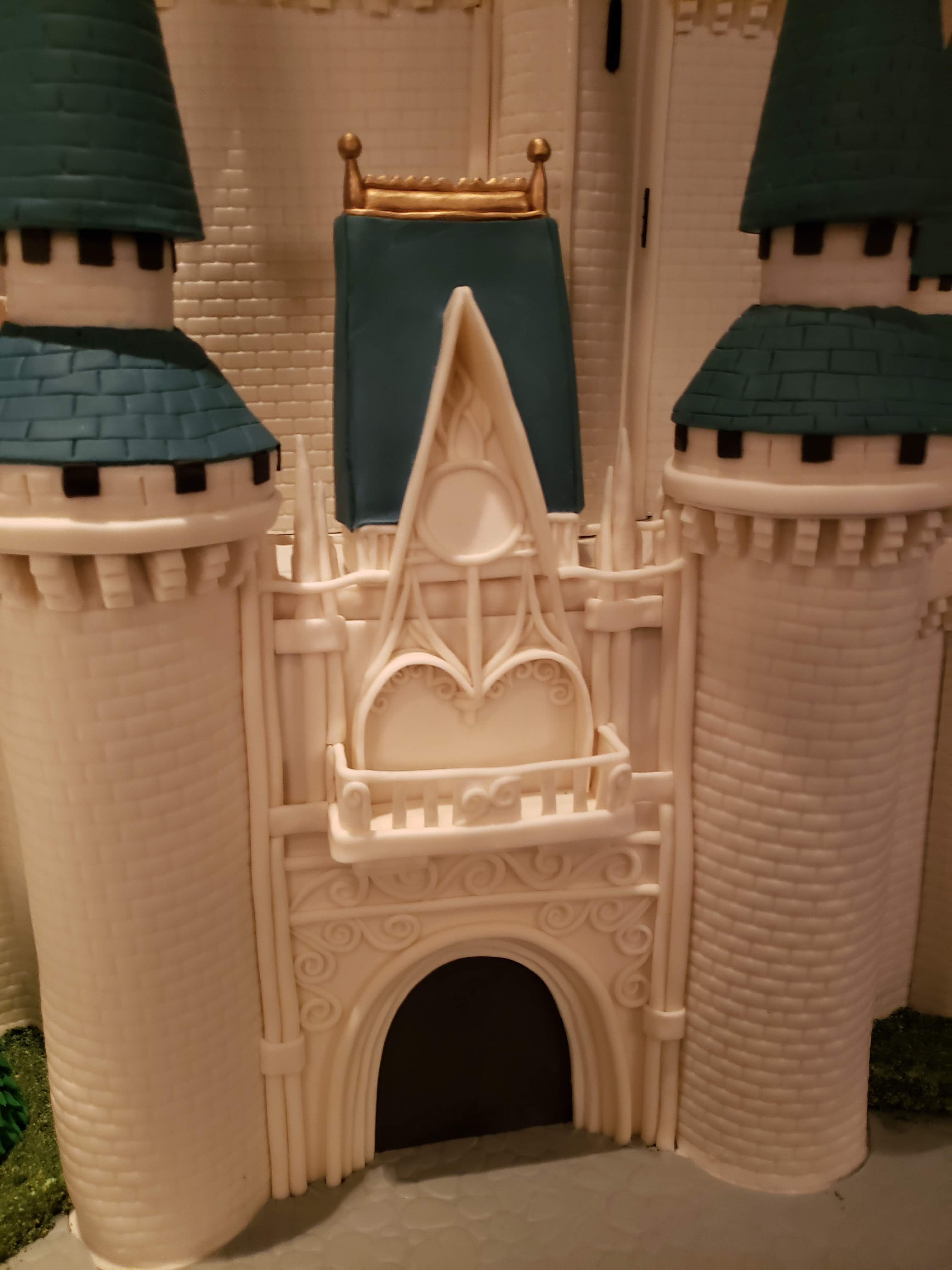 Here is a video that really shows all the intricate details!

ROCKING Custom Cakes that put on an incredible visual show & leave your taste buds screaming for 'more, more, more'! Owned and founded by the 'Rock and Roll Cake Diva', Christy Seguin. The amazing Cakes ROCK!!! team of pastry chefs and sugar artists creates luscious, homemade cakes from scratch using the finest of ingredients, organic when feasible. Then they sculpt those cakes into personalized works of art that are the Rock Star of your celebration and create memories to last a lifetime. From the simple to the extreme.... Sweet Dreams are made of this! View all posts by Cakes ROCK!!! Making Sweet Memories Through Amazing Sugar Artistry